Heading to the Heart of China: The Top Things to Do in Guilin 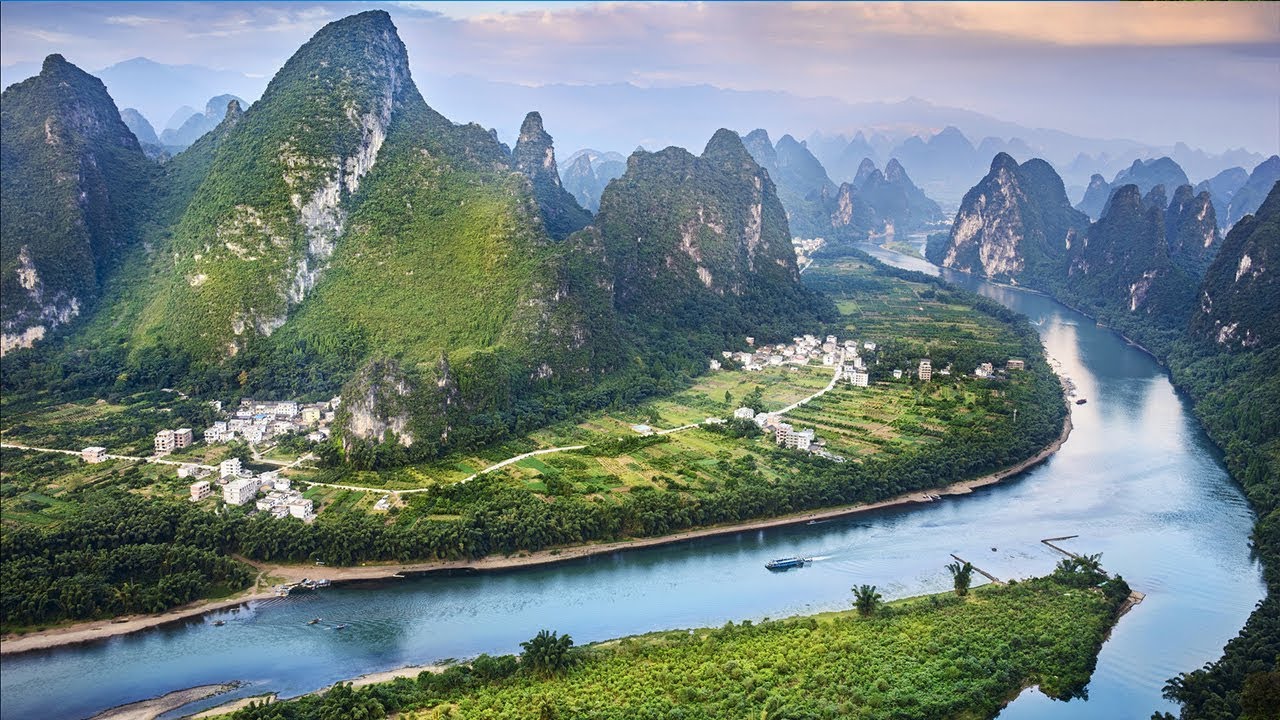 Do you know how many tourists visited Guilin in 2018? A staggering 100 million people! So, what makes Guilin so magnetic? What is it that draws so many visitors to this southern Chinese city? And why should you place it at the top of your list of places to visit in China?

From ancient history to stunning natural beauty, Guilin and its surrounding provinces have it all. In this post, we’ll reveal the best things to do in Guilin to ensure you get the most out of your visit.

Ready to get bitten by the travel bug? Let’s get started!

Chances are you’ve already seen photos of the incredible karst mountains in and around Guilin. Millions of years of shifting carbonate rocks have resulted in some of the most unique topography in the world.

Guilin’s geography isn’t just amazing from the surface. The region is also known for its enormous limestone caves.

Here’s a quick list of must-see caves while you’re in Guilin.

Located in Seven Star Park in the heart of the city, this cave is easily accessible from downtown Guilin.

Also called Qixia Cave, it features an impressive collection of stalagmites, stalactites, and stone pillars. Colorful lights illuminate your journey and give the cave an otherworldly feel.

Three miles from the city center, halfway up Bright Moon Hill, is another spectacular underground feature.

If you have time to travel further afield, add Crown Cave to your spelunking list. You’ll find it about 20 miles south of Guilin in Caoping Village.

What makes this cave so unique? It’s packed with fun ways to explore its depths, including boats, a light rail, elevators, and even a roller coaster!

If staying above ground is more your speed, head down to the riverfront and sign up for a cruise of the Li River.

You’ll travel about 50 scenic miles from Guilin to Yangshuo (more on that later). The cruise takes between 4 and 5 hours and provides a leisurely, relaxing way to enjoy the landscape.

Keep an eye out for fishermen along the banks using their black cormorant birds to hunt for them. As locals have been doing for over 1,000 years, they use the birds instead of hooks or bait to catch fish.

Most river cruises depart from the downtown dock near Liberation Bridge. This is one Guilin experience you don’t want to miss!

3. Get a Taste of Rural Life in Yangshuo

No trip would be complete without a visit to spectacular Yangshuo, 50 miles southeast of Guilin.

If you want to escape the city for a day and get a taste of real rural Chinese life, Yangshuo is for you. It’s a verdant maze of farmers working in their fields between tiny, centuries-old villages.

Cross ancient stone bridges and watch the locals working with water buffalo and cormorant birds. If there’s no bridge, no worries–there are plenty of “water taxis” available in the form of traditional bamboo rafts.

You can reach Yangshuo via a river cruise or a bus ride from Guilin. Once there, you’ll see plenty of places to rent bicycles to aid you in your journey. If you prefer, you can also sign up for a guided cycling or hiking tour.

Whichever way you choose to explore the region, don’t miss the impressive 1,400-year-old “Big Banyan Tree.” It’s so famous it appears in the 20 yuan bill!

The landscape around Guilin is one of the most photographed areas in the world–and for good reason. From karst cliffs to traditional farms and villages, there’s always an incredible sight to see.

Whether you’re a professional photographer or a novice trying to improve your skills, Guilin is the perfect place to practice.

Join a small group of photography enthusiasts and get ready to snap away. From epic panoramas of mountains and rice paddies to up-close encounters with water buffalo, there’s no shortage of amazing photo ops here.

Ready to get behind the camera and score some amazing photos for your scrapbook? Companies like Gatsby offer photography tours to the top sites around Guilin and Yangshuo.

Another day trip you can’t miss is a visit to some of the world’s most famous (and photographed) rice terraces.

Located about 40 miles north of Guilin, the Longsheng region features a dazzling chain of mountains sculpted top to bottom in terraced rice fields. The winding paddies are linked together to resemble long ribbons against the mountainsides.

Also known as the “Dragon’s Backbone,” the mountains in this region reach as high as 4,000 feet above sea level. It’s home to many indigenous peoples including the Red Yao, whose tribeswomen only cut their hair once in a lifetime.

During your visit to the area, you’ll pass through Ping’An, Jinkeng, and Gu Zhuangzhai Village. Stroll between ancient stilted houses and enjoy delicious “bamboo rice” steamed in bamboo tubes.

To get there, sign up for a day tour from Guilin and let the experts navigate the winding mountain roads. If you’re feeling more adventurous, take the local bus from Qintan bus station in Guilin to Heping or Longsheng.

Rising high over the waters of Lake Shan, or Shan Hu, are the Sun and Moon Towers of Guilin.

From a distance, these soaring Buddhist-style pagodas appear almost identical. Only when you get closer do you realize the Sun Tower is made with copper and the Moon Tower with marble.

During the day, you’ll hear Buddhist music emanating from the towers and drifting across the water. For a unique experience, walk through the underwater “tunnel” that connects the towers for a view of life under the lake’s surface.

At 9 stories, the Sun Tower is the tallest bronze pagoda above water in the world. Climb to the top during your tour for an unforgettable view of downtown Guilin and the surrounding hills.

If you don’t feel like climbing all those steps, don’t worry. There’s an elevator inside the pagoda too!

Bonus tip: The best time to stroll past the pagodas is definitely in the evening. Once the sun sets, the towers light up with brilliant gold and white lights that shimmer across the surface of the lake.

The opening ceremonies may have been a once-in-a-lifetime experience, but something similar occurs every night in Yangshuo. Designed by the same director, Impression Liusanjie is unlike anything you’ve ever seen before.

The show is performed in the world’s largest natural “amphitheater” on the banks of the Li River. Over 600 local villagers by day transform into Broadway-worthy actors by night.

The illuminated mountains provide an unforgettable backdrop as the actors tell the story of folk legend Liu Sanjie. Even if you don’t understand Chinese, you’re sure to be moved by the beautiful singing and dancing in such a surreal landscape.

Impression Liusanjie is held at 7:30 pm nightly in Yangshuo. It’s the perfect way to end a day trip to the region.

All this sightseeing is sure to leave you hungry. Luckily, Guilin offers a unique blend of Hunanese and Cantonese dishes to satisfy every appetite.

Guilin’s rice noodles (mifen) are world-famous for their fragrance and delicate texture. You’ll find them on every menu and street corner in Guilin.

After watching the fishermen work on the river, it’s time to enjoy the fruits of their labor. Order a plate of melt-in-your-mouth steamed river fish, or try Yangshuo “Beer Fish” cooked in beer and local vegetables.

The Best Things to Do in Guilin: Now You Know

There’s no doubt about it–Guilin has something for everyone.

If you’re a fan of hiking, cycling, or spelunking, you’ll be in seventh heaven in Guilin. Culture vultures will enjoy exploring the ancient markets, sampling local cuisine, and taking in world-class performances.

And when it’s time to slow down, there’s no better way to take in the sights than a leisurely cruise down the Li River. With so many great things to do in Guilin, your only regret will be that you don’t have more time to explore.

So what are you waiting for? Grab your passport, pack your bags, and let’s go. The wonders of southern China await you!

Need more expert travel advice? Be sure to peruse our recent travel posts before you jet off.