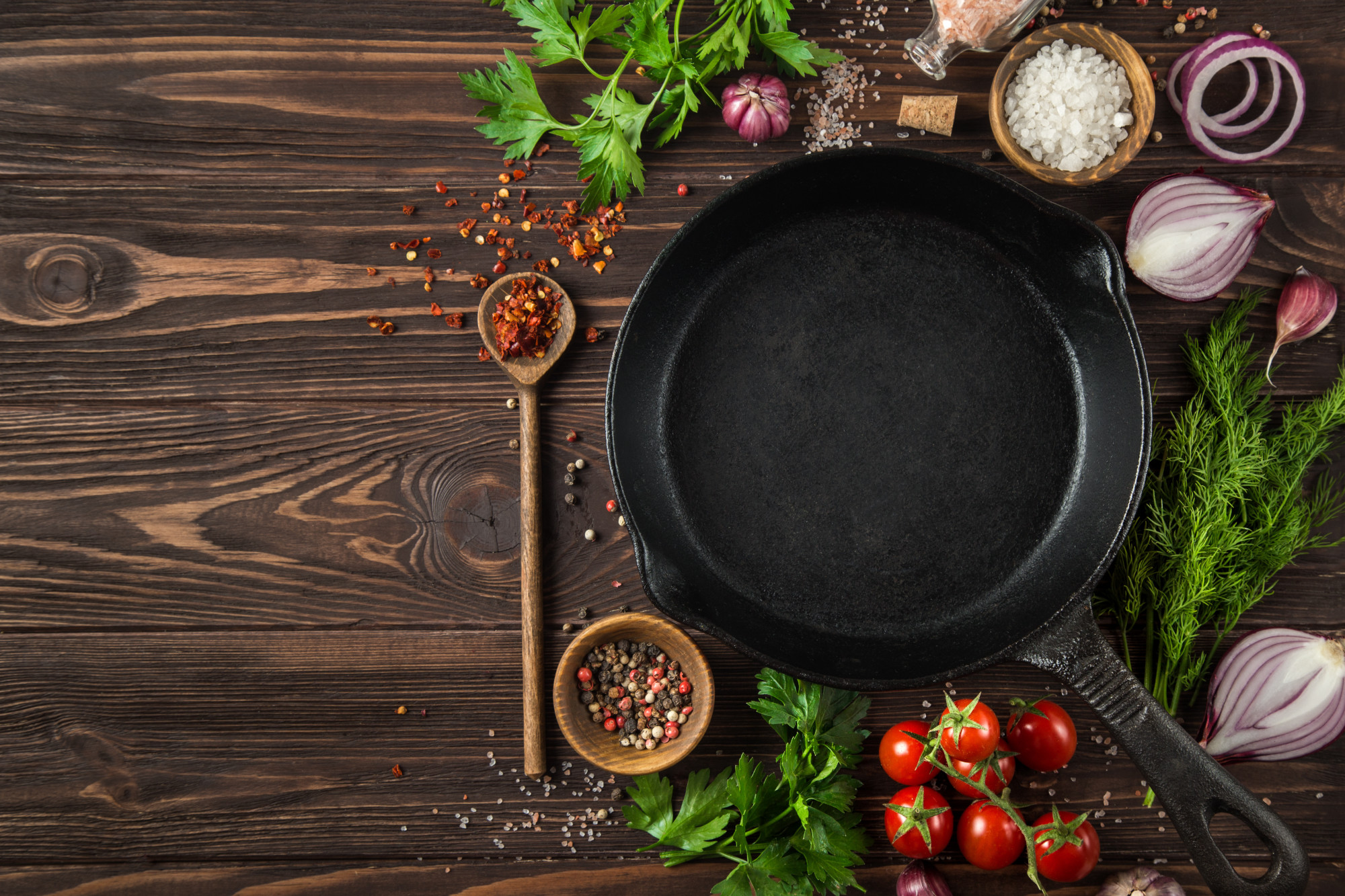 No cooking tool or utensil comes close to the versatility of the cast iron skillet.

Centuries have passed, and it’s still one of our favorites to use for cooking! Filled with love and flavor, cooking with a cast iron skillet is more than just making a meal; it’s an experience.

Breakfast, lunch, or dinner—this skillet can handle almost any recipe you throw at it. It’s more than just a pan because the possibilities are endless, and so are the recipes you can find.

We’ve compiled a list of some of the best cast iron skillet recipes. From experienced cooks and bakers everywhere, there’s one thing they have in common—the realization that the cast iron skillet is here to stay.

If you’re interested in getting started with your cast iron, keep reading to find some of the best and the boldest recipes out there.

A Southern favorite, you can have this side dish with anything from BBQ to Thanksgiving dinner. While usually baked in a regular old pan, this skillet cornbread can be mixed right in the pan, saving you from doing extra dishes!

Fresh, homemade, and fluffy, Kylee’s Fluffy Golden Skillet Cornbread will be a new staple at the dinner table.

This special recipe is cooked on a cast iron grill. Though providing the same beautiful flavor as the skillet, with the grill, you get those iconic char marks and the smoky flavor you expect from a charcoal grill.

This simple, rustic steak from Shirley Lomax Brooks is easy and tasty! With only two ingredients for the marinade, this recipe is all about the process. Don’t even think about leaving those steaks alone, as you’ll be watching them on the grill until the moment they’re ready to be sliced open.

A classic dinner staple, with a twist. Chicken pot pie is the epitome of comfort food.

Even though it’s super easy to make, your guests or family will think you’ve spent hours in the kitchen. The key? Store-bought puff pastry and roughly chopped vegetables.

Taking only 30 minutes in the oven and topped with a flakey puff pastry crust, this chicken pot pie recipe will be your next go-to dinner!

You’ve never had chicken like this! Sure, chicken and veggies are a dinner staple, but cooked in a cast-iron skillet? Get ready to up the flavor.

An iconic one-pan dish, this dinner will not only have everyone excited to eat, but you’ll only have one pan left to clean. Forget the extra baking sheets and scrubbing pots for the rest of the night; with this recipe from Dina at Simply Home Cooked, you’re one and done!

“The best bread is baked in a skillet,” someone said, right? Well, this one sure is. With more flavor and a rustic feel, this bread recipe will have you on carb overload.

With only four ingredients and flavored with rosemary, this easy no-knead skillet bread recipe will be quick enough to whip up whenever you get that craving! Recognizing the intimidating nature of bread-baking, Baker Bettie breaks it down for you into a few simple steps.

With simple bread recipes like this, you can also always add your own flavor twists like switching up the herbs or adding in special seasonings.

Okay, I know what you’re thinking, cheese in my cast iron skillet? But yes! These skillets make the perfect baking dish for the ooey-gooeyness that is a freshly baked queso dip.

The even heat applied throughout the cast iron skillet allows the cheese to melt all the way through. Pair with your favorite tortilla chips or top off a burger or hot dog.

This campfire queso with Velveeta, pepper jack cheese, sausage, and beer, will be the hit of the camping trip! Not one for outdoor adventures? No worries, you can still make this just as well in your oven at home.

Another favorite to serve with breakfast, lunch, or dinner, these biscuits will fly out of the pan! With a buttery crust and warm, soft bread inside, these will be sure to butter your biscuit.

Shelley Jaronsky is not playing around when it comes to these biscuits. FILLED with butter and baked just right, she’s got this recipe nailed down. Her recipe for the best skillet biscuits is rightly named so.

Pair it off with butter or jelly, and see what the buzz is all about!

Again, what better way to serve up a creamy, cheesy dip than with a cast-iron skillet? Filled with fresh spinach and rich artichoke, this classic dip will be a hit at your next get-together or for a snack.

This cheesy spinach artichoke dip from Mantitlement is the epitome of this classic. A party-food that’s also a party in your mouth, you won’t be able to step away from the appetizers!

Pair this dip with your favorite crackers, preferably ones that can hold up to the weight of all that cheese.

Oh, the flavor! If your pan wasn’t already “seasoned,” it will be now.

This cajun shrimp can be made with pasta, veggies, put on tacos, or any recipe you choose. The base is a spicy, flavorful, buttery shrimp full of Creole spices.

There’s no better way to blacken seafood than in a cast-iron skillet, and you can quote us on that! Layla’s cast-iron blackened shrimp from Gimme Delicious is tender, juicy, and great on anything.

Not feeling shrimp? Pair this recipe with any other protein and get similar results.

Okay, I’m sure you don’t really think about making breakfast in your cast iron, do you? But this cast iron quiche is perfect for Sunday brunch (or leftovers for the week)! Filled with delicious veggies, ham, and cheese, this dish is sure to satisfy your breakfast cravings.

Is there really a better pairing for eggs than with ham and cheese? Well, if there were, Melinda at Recipe Fiction would certainly know it! This cast iron quiche served hot out of the oven is just what Sunday morning asked for.

Warm and satisfying enough to last you through lunch, this fantastic quiche is great for meal prepping or for the whole family! Are you feeling fancy? Pair with a mimosa to start your day off right.

This dessert served straight out of your cast iron skillet will be a fan favorite! Forget about a brownie pan; your mix poured directly into the cast iron will come out perfectly steamy and chocolatey.

Made with plenty of cocoa powder and chocolate chips, this brownie recipe from Gemma at Bigger Bolder Baking will be an irresistible delicacy. Topped with crunchy walnuts, this skillet brownie has the perfect ratio of crust to ooey-gooey chocolatey center.

Want to take it a step further? You guessed it, serve with cold vanilla ice cream! Scooped right out of the pan, these brownies will be gone before you can come back for seconds.

Another dessert that doesn’t need its own pan, this skillet cookie is a quick dessert staple. While you can make it with store-bought dough to keep it simple, you can also keep it authentic as Modern Honey does here.

Bet you didn’t see this one coming, did you? The flavor that your cast iron can give the crust of a pizza is just right! Not only does the cheese melt perfectly, but your crust still gets crunchy and soft.

Put in the oven like a pizza stone, a pizza in your cast iron skillet will undoubtedly come out better than on your cookie sheet. While you could make this with any variety of the toppings of your choosing, here we thought Ree Drummond’s classic pepperoni pizza recipe would be a hit for anyone!

Made with store-bought pizza dough, this one won’t take to long to craft, so you won’t be too tired from all that kneading to enjoy it.

A classic that has stood the test of time, a cast iron dutch oven roast is sure to bring the whole family together! With juicy flavor-filled beef and soft seasoned vegetables, this roast is more than dinner; it’ll be the centerpiece of your table.

A meal that will satisfy your family for days is this dutch oven pot roast from Feast and Farm. Though it’s a bit of a process to make, the outcome is worth it. Plus, saving a bit for leftovers will make it last and keep you enjoying this for a few more days.

Are you looking to impress some guests? Do you need a nice Sunday night dinner for the in-laws? This is it! While it may take some attention to get your roast just right, you won’t be disappointed with the results.

I’m sure you’re thinking, oh no, more cheese? But just wait for it, this is a good thing!

But if you’re still skeptical about how to clean cast iron skillets, you’re not alone.

It’s pretty simple. Just make sure to wash it soon after using, and don’t let the skillet sit in the sink. Too much exposure to water can cause it to rust, and you don’t want to scrub at it too hard, or you risk rubbing away the seasoning.

Cleaning aside, this mac and cheese will be a hit for dinner this week! Not only is it creamy and cheesy, but you get a beautiful golden crust around the edge where it bakes just right.

This cast iron mac and cheese from Macheesmo is full of cheese and bacon. There’s no better twist on mac-and-cheese than with crunchy salty bacon! With a crispy crust, like all decent mac-and-cheese recipes have, this will be an easy family-favorite.

If you’re a cast iron fan like us, you’ve probably already taken your skillet out to give one of these mouth-watering recipes a try!

Whether you use it for breakfast, lunch, or dinner, know that these cast iron skillet recipes have stood the test of time. After centuries of use, cast iron is still around—and for good reason!

The variety you see in these dishes is nothing compared to the other possibilities out there. So, we challenge you to try these recipes and also try making some of your own favorites at home.

And you’re not just limited to the cast iron skillet. You have cast iron grills, dutch ovens, mini cast irons, and more.

Got a favorite cast-iron skillet recipe or see one here you want to try? Let us know below, as we’d love your take!